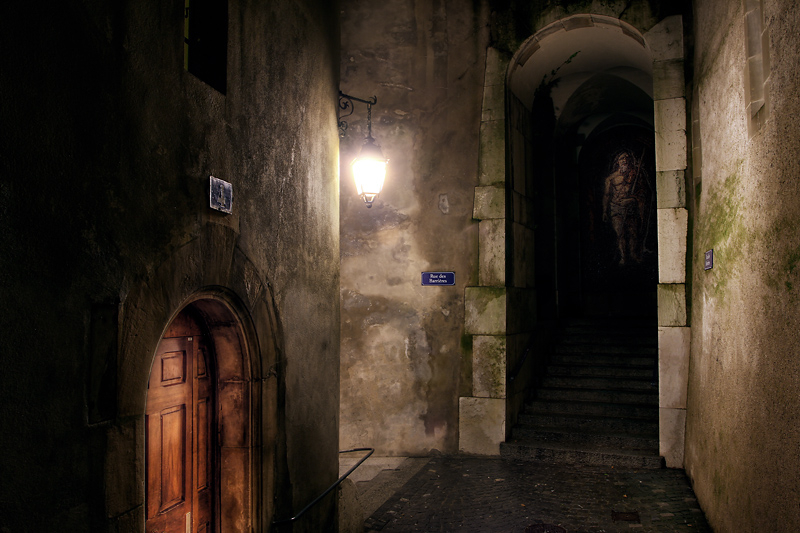 The Return of Charles Dexter Ward

Posted by Albert (Sweden, living in Mechelen, Belgium) on 9 January 2011 in Cityscape & Urban.

Whenever I stroll the Old Town of Geneva I sooner or later end up in this alley (Rue des Barrieres). The stairs going down to the left behind the corner can also be seen in my old post The Case of Charles Dexter Ward. The man coming out from the dark is a mosaic on the wall.

The photo was taken a month ago, but is freshly processed.

IN LIGHT OF YESTERDAY'S TRAGEDY HERE IN ARIZONA, PLEASE VISIT MY POST.

SOUL AFLAME from The bosom of nature Canada &, United Kingdom

Not only an amazing frame, Albert, but also alive with depth and detail thanks to some beautiful processing. Every nook and cranny has a pleasing ambiance and draws me into the frame. Great work.

The Big Guy from Regina, Canada

Quite mysterious and darkly themed.. it really does convey emotion, a little suspense too.

This is very sharp and very beautiful. nice photo, i like

Great tone and texture, the mosaic looks like a real man and adds mystery and tension.

I love the atmosphere of your shot ... just excellent !

Great processing as well. I love the warmth of the door and the ghost of Charles Dexter Ward is so realistic. I was just strolling Geneva, too.....Geneva, Illinois that is. ;-)