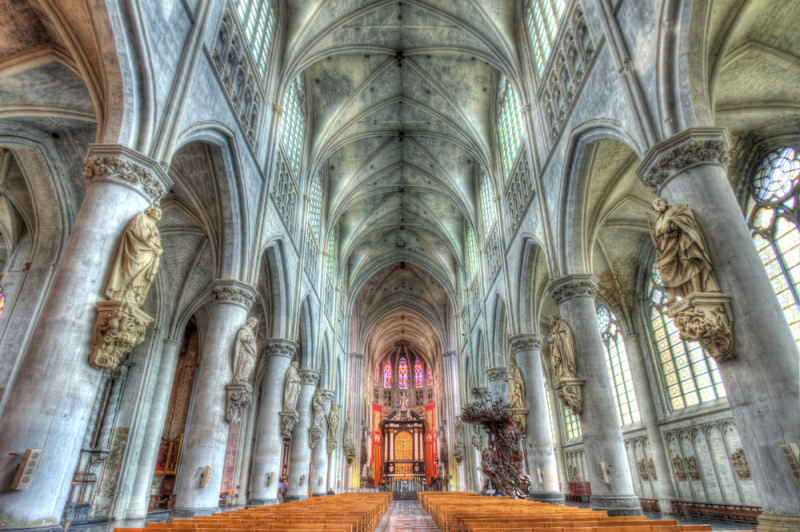 Posted by Albert (Sweden, living in Mechelen, Belgium) on 13 December 2017 in Architecture.

At some point I think I "removed" this post postum (moved it really far in the future), because I was annoyed about something I can't remember and thought I was just gonna fix it later. Then I forgot it, but now it was automatically reposted and it got a "Spotlight" so I will just keep it where it is as a memory of the past. In July 2014 I was living a quite different life. Since then I changed my career, got married, became a father and gained a couple of pounds.

The response to the post is quite inspiring, and I think I will make an attempt to produce something new the coming days.

Thanks for all the comments and support. I recognize many names from the past. Great to see that you are still active!

Splendid shot that you've captured here!! I love how the color at the altar and stained glass leads my eyes down the aisle.

such beautiful frame, perspective, colors & details!
A M A Z I N G !

Weird. This shouldn’t be posted. Very old photo. But ok, why not...

What a beautiful capture which adds incredible depth to this composition. Welcome back!!

A very persuasive image of great feeling - Congrats on the Spotlight !

You didn't even mean to post it, and you get a Spotlight! Congrats!

Thanks guys! My account is apparently living its life by its own. This is quite inspiring. I've not had much time for photography recently, but now I think I will try to drag my ass out with the camera during the weekend.

Congratulations on your SPOTLIGHT!

Wonderful image !! Congratulations on your Spotlight !

: Helen : from is currently at home photographing in, Australia

Excellent. Lovely light and contrast between warm and cool tones.

Absolutely gorgeous! Congratulations on the Spotlight!

This image has been featured in 1 Remix collection.